Each January, the Association for Insurance Leadership (AIL) holds its Annual Meeting, ASCEND – The Agency Growth & Leadership Summit. As with Association membership, ASCEND is open only to agency leaders of independent employee benefits firms and benefits practice leaders at independent P&C agencies.

In support of the AIL Mission of elevating the industry by elevating individual benefits agencies, ASCEND provides guidance and resources to assist agency leaders in transforming their agency into a NextGeneration Benefits Firm® that can remain relevant, profitable, independent, and capable of sustained organic growth.

ASCEND has been called “the anti-conference” for both its unusual format that features an active role for its attendees and its unique emphasis on business-building strategies that foster organic agency growth.

From its unique Expert Roundtables – think speed dating between agency leaders and industry experts on a wide array of business-building subjects – to expertly facilitated Mastermind sessions where you collaborate on agency best practices and growth strategies with non-competing peers…ASCEND provides you with an experience unlike any you’ve ever had.

Agency leaders who attend ASCEND are almost universal in their praise for the event. See what these agency leaders say about ASCEND: 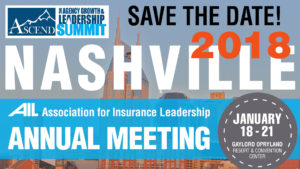 Thanks for a great event at ASCEND!! It was the best conference I have been to in my 28 years in the insurance business.

Thank you again for your efforts in putting together another great conference for forward thinking consultants!

Picked up a lot of great ideas, very innovative, a very new direction. Exactly what I was looking for!

Thanks again for making Ascend a memorable and valuable experience. It was truly a game-changer for me….

Once again you surpassed expectations! Thank you for an amazing conference. Wow. I did not think you could top last year but you did!

Amazing content, great speakers, very helpful stuff. A+! I had no concept that it would be this good.

ASCEND was excellent, the best conference I’ve ever attended! The agency leaders I met and the strategies I discovered at ASCEND changed everything for me.

Wow, what a conference! It exceeded expectations…a firehose of knowledge, ideas & support! Can’t wait to put your teachings & lessons into practice.

ASCEND lived up to its billing as the “ANTI-CONFERENCE,” with its laser focus on helping agency leaders drive positive change and elevate their firm!